Playstation VR - What You Need To Transport Yourself To New Worlds

Finally, Virtual Reality is finally making its way into the mainstream world of gaming…and it’s about time. With many big-name headsets now on sale, the world of virtual reality is more accessible than ever. If you’re new to Virtual Reality then it’s easy to feel a little overwhelmed and that is why we have compiled a guide to the world of PlayStation VR.

So, now you have everything, what do you do now? You’ve probably realized there’s a ton of components in the PlayStation 4 VR bundle, not to mention the move batons and camera sold separately, so it can be difficult to know where to start.

Keep a hold of the processor unit and plug the AC power unit into it before connecting it to a power outlet. Locate the VR headset connection cable and plug this into the front of the processor unit whilst being sure the symbols match so you know everything is in the right place. On the other end of the connection cable, plug in the VR headset, again making sure the symbols match that of the corresponding port.

Don’t worry, you’re nearly done now, we promise! Once the VR headset is connected, you now need to connect that PlayStation Camera you purchased separately. Attach the cable of the camera to the corresponding port found on the back of the PS4, once connected, place the camera above the TV ensuring there are no obstructions blocking its view of the room.

Once all of the components have been correctly plugged into the PS4, you’re ready to turn on the console and follow the on-screen instructions to configure your play area and finish the final setup of the VR system. 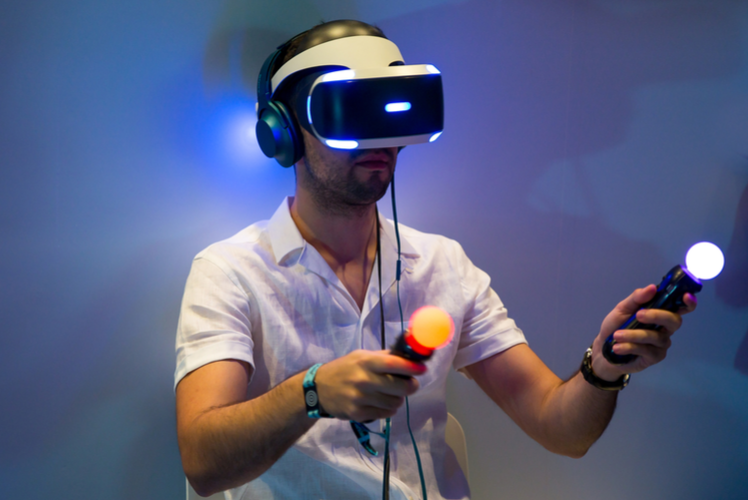 Now that you’re good to go; it’s time to choose some of the very best PS4 VR games. Elder Scrolls 5: Skyrim VR has received some rave reviews and it’s easy to so why, the entire RPG experience is in VR so it really does transport you to a new world. It’s as fun and rewarding as ever!

If Elder Scrolls 5: Skyrim VR isn’t for you then Until Dawn: Rush of Blood just may be. The shooting experience with this game is truly brilliant and the guns feel great, if you’re looking for a frightful experience then look no further as the game is genuinely terrifying. You’ll certainly be taken on a rollercoaster ride full of thrills, scares with some brilliant shooter action. With a carnival-inspired aesthetic you’ll be left on the edge of your seat and with Halloween just around the corner, it’s the perfect choice. Whilst the game is consistently good, the themes aren’t too consistent meaning there is a good level of variety.

Sprint Vector is another great choice, fun, quirky and colorful it’s worlds apart from Until Dawn: Rush of Blood. It does take a little while to get a hang of but once you’re well acquainted it’s a great game and excellent fun in multiplayer.

If you’re looking for something rather simple while you get to grips with PlayStation VR then look further than Rez Infinite, a fantastic example of how VR can bring a game to life. This VR release is simple to play, looks great and boasts an amazing soundtrack. A remake, it revitalizes the cult classic Rez Infinite with much improved visuals and never before seen stages that were scrapped from the original way back in 2001.